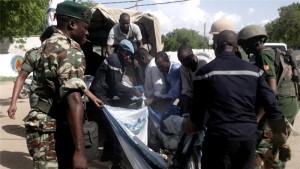 Twin suicide bombings killed at least five people, including two young female bombers, in northern Cameroon on Sunday, according to the minister of communication Issa Tchiroma.

The attacks occurred in Mora, a town located near the border with Nigeria’s Borno state, where the Islamic militant group Boko Haram carried out the bulk of its attacks.

The dead included two civilians and the two female suicide bombers, who detonated themselves when they were stopped by a police officer near the entrance to the town. The police officer was also killed.

The group gained international infamy when it kidnapped over 200 schoolgirls from the village of Chibok in April 2014. Experts have speculated the group might be using abducted children to conduct the continuing wave of suicide attacks.

Recently, five villages in northern Cameroon were attacked and the assailants looted and burned homes.

Since July, about 100 people have died in suicide attacks in the extreme north of the country, which is a major contributor to the 8,700-strong, Nigerian-led regional force expected to start operations against Boko Haram this year.

The Nigerian-based Islamists have seized countless children and youths during their six-year insurgency that has killed at least 15,000 people and left more than 2 million homeless.