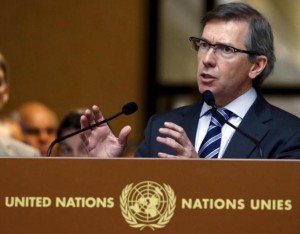 “We have now a text that is the final text,” the Special Representative and Head of the UN Support Mission in Libya, Bernardino León stated as he announced that U.N’s part in the political dialogue “is now finished” and the rival governments should “react to this text” positively.

An agreement is expected to be reached in the days following the Eid holidays when both governments will discuss those who should be in the transitional unity government.

León’s Monday night statement stated that “there is a clear possibility for the chaos to finish, with a clear definition of who is the government” but warned that it could only be possible when the rival governments consider what “this process is going to bring to the country and not be concerned of what they would have liked to see in the text” or its outcome.

The parliaments in Tripoli and Tobruk have often rejected amendments that they think give more power to their opponents and that have stalled the progress of the peace dialogue. It seems as if there will be no more amendments to the draft according to the statement made by Leon as he also stressed that the “the question today is to get Libya back on track to build peace, development, prosperity” in order “to return to what Libya always was, a rich country, a healthy country.”

Armed groups loyal to the two governments have been fighting over the control of the country since the fall of the Gadhafi regime but Leon is hoping that they will “put the interest of their country above any other consideration” and react positively rather than blocking it.

The delegates reportedly showed interest in signing the agreement in Libya before the UN 20 October deadline.