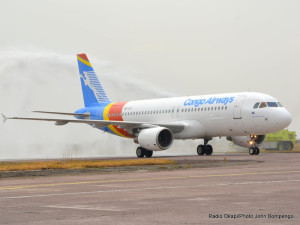 An airplane belonging to Democratic Republic of Congo’s new national carrier was released by an Irish court earlier this week after it was grounded over a debt row with two American investors, Congo’s justice minister said.

The Irish court grounded the plane in August 2015 after private investors from a company called Miminco said Congo owes them $11.5 million (€10.3m) to repay assets seized by government forces from diamond mines they controlled in the 1990s.

The Airbus A320 is one of two planes recently purchased by the government for the launch of Congo Airways, expected before the end of this year. It was being painted at Dublin Airport ahead of its arrival in Congo.

“The Irish judge ruled in our favor this afternoon. The plane has been freed and it can return to Congo,” Justice Minister Alexis Thambwe said, adding that “the court found that the debt, which Congo acknowledges, did not concern Congo Airways”.

The first one arrived at the N’Djili international airport in Kinshasa on July 30, 2015.

Congo Airways is entirely owned by public Congolese entities and is meant to replace the country’s last national carrier, which went bankrupt in 2003.