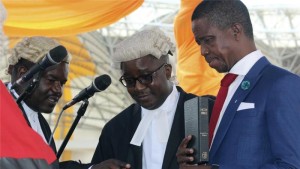 Zambia holds a day of prayer and fasting, with bars shut and football matches cancelled, to seek divine help over the country’s currency collapse and dire economic situation.

President Edgar Lungu conceded before a gathering of some 5,000 Zambians, including former presidents Kenneth Kaunda and Rupiah Banda that the country is facing serious social-economic challenges.

Catholic priest Michael Mawelera said during a mass in the capital Lusaka that: “the shortage of electricity has affected all of us. Companies are scaling down production and laying off workers”

“Prices of essential commodities have risen because of the depreciation of the kwacha. We need to seek God’s hand,” he said.

Edgar Lungu last month ordered the national prayer session after the kwacha fell 45 per cent against the dollar since the start of the year due to a sharp drop in the price of copper, the country’s main export.

Critics of the government have accused Lungu of failing to tackle the causes of the country’s economy troubles, saying that the prayer day was a distraction.

Food prices have soared and crippling power shortages have also been triggered by low water-levels in Lake Kariba, where hydropower plants supply much of the country’s electricity.

According to Finance Minister Alexander Chikwanda, the country’s economy is expected to grow by less than 5 percent this year, down from an earlier projection of around 6 percent.