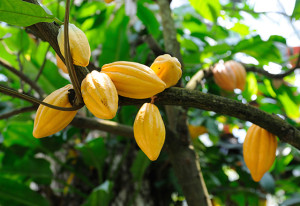 Hours after been re-elected as president of Ivory Coast, Alassane Ouattara told reporters that his country will supply half of the world’s cocoa by 2020.

“We will continue to boost our production, there is no limit,” Ouattara, said in an interview in his office on Wednesday.

“I hope we can surpass 50 percent of global production in 2020 while continuing to improve the quality.”

Ivory Coast is the world’s leading producer of cocoa. The country supplies more than 30% of global cocoa making it the leading in exports, while the cash crop is responsible for almost two thirds of trade revenue realized by the nation.

Despite recent reports of downturns due to crop failure caused by unfavourable climatic conditions, the country is still aiming towards great profits from cash crops.

Since 2011, the government guaranteed cocoa farmers a minimum price for their harvest and raised the minimum wage for other workers to 60,000 CFA francs ($98) from 36,000 francs.

Ouattara declared that one of his priorities for the next five years is to increase domestic processing of its biggest exports, cocoa and cashew nuts.

“I want to work on transforming the Ivorian economy,” he said. “We’re an agricultural economy, but we need to step up processing of our crops and even move toward industrialization.”

As the 2015/2016 cocoa season commences, the Ivory Coast government, through the Coffee and Cocoa Council (CCC) released a document granting more licenses to cocoa exporters. This increases the number of companies and cooperatives that participated from 80 in the previous season, to 113 this time around.