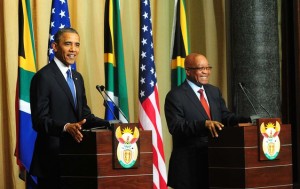 United States President Barack Obama has officially notified the South African government and the US Congress on Thursday that he intends to suspend the duty-free access of all South African agricultural products into the US market under the African Growth and Opportunity Act (AGOA), from January next year.

The suspension will become effective in 60 days, according to the notice.

The move follows a U.S. review of South Africa’s status as a full beneficiary of a preferential trade agreement under the AGOA, which eliminates import levies on more than 7,000 products ranging from textiles to manufactured items.

“I am taking this step because South Africa continues to impose several longstanding barriers to U.S. trade, including barriers affecting certain U.S. agricultural exports,” Obama wrote in a letter to Congress.

Obama said South Africa has until January 4 to prove it was complying with the eligibility requirements to enjoy duty-free access for its agricultural products under AGOA.

He asked Pretoria to eliminate its health barriers on imports of US poultry, pork and beef to avoid the implementation of the suspension.

The Act aims to boost African trade by offering eligible countries duty-free access to US markets.

As a major beneficiary of the AGOA, South Africa exported $176 million in agricultural products to the United States under AGOA in 2014 and potential lost benefits are estimated to total $4 million to $7 million.

Products affected would include oranges, wine, and macadamia nuts.