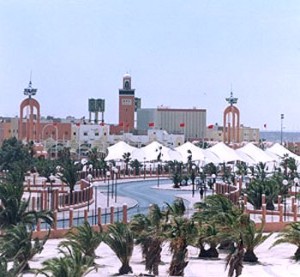 King Mohammed VI of Morocco has unveiled a landmark master plan for the socioeconomic development of Southern provinces and pledged to usher in new era in handling the Sahara issue.

In his nationwide address made on November 6 on the occasion of the 40th anniversary of the Green March, the Moroccan Sovereign also vowed to end rentier economy and spur a new thinking, a new management mentality and give a new momentum to private sector in the Southern provinces.

“Today, 40 years after the Green March, and regardless of the advantages and the downsides, we want to make a radical break with the manner in which Sahara issues have been dealt with so far: a break with the rentier economy and privileges, a break with poor private sector involvement and a break with the mentality of centralized administration”, said King Mohammed VI.

“Conditions are now ripe for the dawn of a new era in the process to consolidate national unity and achieve full integration of our southern provinces into the motherland”, stressed the Sovereign, affirming that “the implementation of the Development Model for the Southern Provinces and the application of advanced regionalization are part of that process”.

King Mohammed VI vowed to provide citizens in the southern provinces “with all the necessary means to enable them to manage their own affairs and show they are capable of developing their region”.

The implementation of the Development Model for the Southern Provinces shows “how committed we are to fulfilling our obligations towards our fellow citizens in these provinces, which will thus become a model of integrated development”, underlined the Sovereign.

“We want this Development Model to seal these provinces’ integration into the unified homeland and to enhance the influence of the Sahara region as an economic hub and a crucial link between Morocco and its African roots”, added King Mohammed VI.

To achieve this goal, “I have therefore decided to muster all the means available (…)to implement a number of major projects as well as social, medical and educational programs in the regions of Laayoune-Saqia el-Hamra, Dakhla-Oued Eddahab and Guelmim-Oued Noon”, said the Moroccan Sovereign.

He also announced the planned enhancement works of the road network of the region and the projected building of a modern dual carriageway to link Tiznit, Laayoun and Dakhla.

King Mohammed VI called on the Government to ponder on setting up hub airports in the Southern Provinces to serve African destinations.

“One of my ambitions is to see a rail link between Tangier and Lagouira to connect Morocco with the rest of Africa. I pray that Almighty God assist us in securing the funds we need today to complete the Marrakech-Lagouira line”, added the Sovereign, unveiling plans to build “the Great Dakhla Atlantic Port, implement major solar and wind energy projects in the south and connect Dakhla to the national electricity network”.

One of the main goals of these projects is to link these networks and infrastructure to African countries, thereby contributing to their development, stressed the Moroccan Sovereign.

And to improve the citizens’ living conditions, Morocco is keen to press ahead with economic development and to support that process with human development projects, said King Mohammed VI, affirming that “revenue from natural resources will continue to be invested in the region, for the benefit of the local populations and in consultation and coordination with them”.

Besides the major infrastructure & industrial projects to be carried out in the region, incentives measures will be introduced to encourage both national and foreign investors so they may contribute to development in the region, said the Sovereign.

The Moroccan sovereign who pointed out that Morocco has been up to its commitment to guarantee peace and security, said, “today, the Moroccan Sahara is the safest area in the Sahel and Sahara region,” vowing “to make the Moroccan Sahara a hub for communication and exchange with sub-Saharan African countries and to build the infrastructure needed to that end.”