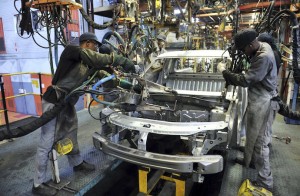 Nissan Motor plans to build a new model of pickup at its South African plant starting in 2018 to meet the growing demand of new vehicles on the African continent.

Nissan South Africa Managing Director Mike Whitfield told Bloomberg News on Tuesday that the carmaker is in talks with suppliers about the additional model, and will probably announce details of the plans in early 2016.

“Like any investment decision there are a number of key milestones, but we are moving forward,” Whitfield said.

While competitors such as Ford Motor Co., Volkswagen AG and BMW AG export South Africa-made vehicles as far as the U.S., Germany and Japan, Nissan’s factory in Rosslyn, north of Pretoria is focusing its efforts on sub-Saharan Africa, where the company already has the second-largest market share when South Africa is excluded.

“For us, the future potential of this industry is going to be the future growth of Africa,” Whitfield said.

The company’s Rosslyn plant produces the NP200 half-ton pickup and NP300 one-ton Hardbody. The company plans to eventually reach the factory’s full capacity of about 100,000 vehicles per year on a two-shift basis, Whitfield said.