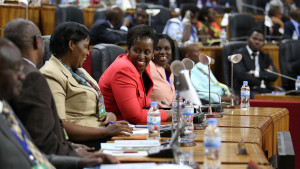 The United States has condemned on Wednesday a vote by Rwanda’s two houses of parliament to approve a change to their constitution that allows President Paul Kagame to serve a third term.

The diplomat did not explicitly threaten that US aid to Rwanda would be cut, but warned ties could be reviewed.

The Rwandan senate’s decision to approve an amendment to the constitution on Monday evening must still go to a referendum.

Kagame is the latest long-serving ruler in Africa to attempt to extend his hold on power. Similar moves have already sparked violence and instability in Burkina Faso, Burundi and Congo Republic. So far there has been no unrest in Rwanda.

Critics accuse Kagame, 57, of trampling on media and political freedoms, charge officials deny. The government says it cannot be blamed if opponents fail to win at the ballot box.

A date for a referendum has yet to be decided.

Kagame has run Rwanda since his rebel army ended the 1994 genocide and ousted Hutu extremists.

Earlier this year, more than 60 percent of voters signed a petition calling for constitutional changes to be drafted that would allow Kagame to stand again.