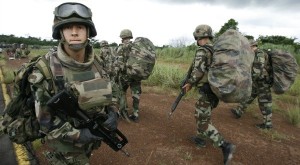 The new European mission meant to support the fight against organized crime and terrorism in the Sahel region, dubbed “EUCAP SAHEL Niger” kicked off earlier this month with the arrival in Niger of about 50 experts.
The aim of “EUCAP SAHEL Niger”, initially due to last for two years, is to improve the capacities of Nigerien Security Forces (Gendarmerie, Police nationale, Garde nationale) to fight terrorism and organized crime in an effective and coordinated manner, with a view to contribute to enhancing  political stability, security, governance and social cohesion in Niger and in the Sahel region. The mission will also help Niger improve the control of its territory, thus allowing for the execution of development related projects and facilitating development as a whole.
A team of around 50 international and 30 local staff are to be based in the headquarters of the mission in Niamey (Niger), with liaison officers in Bamako (Mali) and Nouakchott (Mauritania). The EU has earmarked for the first year, a budget of EUR 8.7 million.
According to the EU, the Sahel has a prominent place on its political agenda and Europe has multiple interests in the region, including the fight against insecurity and organized crime, energy security and illegal migration.  This mission is designed to help fill “missing links” in the EU’s strategic approach to the region, and it will usefully complement other actions funded from EU developmental and humanitarian funds.
Commentators note that concern over energy security was among the main reasons behind the move. If northern Mali does not represent any vital strategic interest for Europeans, such is not the case for Northern Niger, especially for France which is eying the Imouraren uranium mine.
The French company Areva is already exploiting the Arlit and Akokan uranium mines in Niger and plans to start exploiting the Imouraren mine in 2013-2014 if the security situation is propitious. The Imouraren mine will therefore be the second largest mine in the world with an average production of  around 5000 tons of uranium per year.
So, Western countries will do anything to prevent terrorists and radical Islamists from laying hands on this uranium.
Besides, Niger constitutes an essential link in the fight against terrorism, as the country is located between the Malian sanctuary of al-Qaida in the Islamic Maghreb (AQIM) and the fanatics of Boko Haram who have been terrorizing northern Nigeria for years.
So, empowering the Nigerien army also means preventing the Islamists from establishing a corridor between the camps of these terrorist groups, especially since the borders are porous and since exchanges between AQIM and its Nigerian brothers already exist.
If some countries in the region have welcomed the EUCAP SAHEL Niger mission, a stronger presence of civilian and military experts from western countries in the Sahel does irritate the Algerians, who on their part irritate the Europeans by their passivity with regard to the deteriorating security situation in the region.
A French parliamentary report, published in March, had actually criticized Algiers for its attitude considered too passive with regard to the deterioration of the security situation at its Southern borders.
“It is indisputable that, until now, the attitude of Algeria in the face of the threat embodied by AQIM at its southern border was ambiguous,” the report had underlined, in what was described as a diplomatic but nonetheless virulent criticism of the North African country.
Algeria’s inaction and ineffectiveness and the failure of ECOWAS to cope with the situation prompted Western countries to act quickly and discreetly to contain the terrorists.