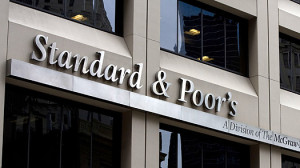 The rating agency Standard & Poor’s has removed Egypt from its watch list and affirmed long and short-term foreign and local currency sovereign ratings on it, although with negative outlook.
“We are therefore affirming our ‘B/B’ long- and short-term sovereign credit ratings on Egypt. At the same time, we are removing the long-term ratings from CreditWatch, where they were placed with negative implications on June 25, 2012,” S&P said in a statement.
“B” is a speculative grade rating which indicates that the rated entity is more vulnerable to adverse business, financial and economic conditions but currently has the capacity to meet financial commitments.
S&P said the decision was based on the emergence of working relationship between Egypt’s dominant political group and the military.
S&P said, “The ratings affirmation reflects our opinion that a working relationship between the military and the dominant political group, the Muslim Brotherhood, is gradually being reached. In our view, this could pave the way for an improvement in medium-term policymaking.”
“We therefore project that Egypt’s weak public sector finances and external position could stabilize,” the agency said warning however that it could “downgrade the rating if political or social tensions escalate once more.”
S&P said it now expects a relatively stable few months ahead, which could give the authorities room to achieve political and policy consensus sufficient to facilitate the external and domestic financing necessary to fund the government deficit and support the Egyptian pound.
Egypt which is facing considerable challenges, including the need to restart growth and reduce budget and balance of payments deficits, has requested a $4.8 billion loan from the International Monetary Fund (IMF).
The international financial institution said it is ready to help Egypt and will send a technical team to Cairo in September to discuss details of possible forms of financial assistance.
IMF Managing Director Christine Lagarde said during a recent short visit to Cairo that the IMF was responding quickly to this request.