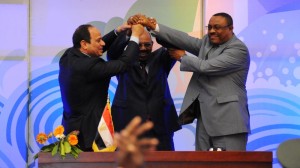 Foreign minister and Water minister of Egypt, Sudan and Ethiopia met in Khartoum on Friday and Saturday to discuss the Grand Renaissance Dam being constructed on the Blue Nile by Addis Ababa. Cairo is worried that it will be affected by the dam. An agreement is yet to be reached although a Declaration of Principles was signed in March 2015 but President al-Sisi pointed out that it was not an agreement. Work on the site is almost halfway complete while 20% of the dam has been built.
Hossam Moghazi, Egypt’s water and irrigation minister, said after the meeting that Cairo is deeply concerned by the Ethiopian project because it is a question of “national security” and the waters of the Nile River are a “red line” that “we will not allow” to be crossed. Ethiopia’s Prime Minister Haile mariam gave assurances in March that they will consider downstream countries “specifically the Egyptian people.”
Critics in Egypt said the talks are a failure but Moghazi told channel TEN that it was the first time Water and Foreign ministers met to discuss the issue.“Some people believe that we could solve issues in one sitting that have existed for the past four to five years, since 2011. We have agreed on a number of solutions and we will resume talks in the upcoming round,” he said.
Egypt’s former Water Resources and Irrigation Minister Mohamed Nasreddin Allam alleged that the government is “using the same approach they have been taking just to cover up for the failure of the officials, as opposed to working for the benefit of Egypt” when dealing with the “Ethiopian-Sudanese alliance”.
The Grand Ethiopian Renaissance Dam will have a storage capacity of 74 billion cubic meters when completed in 2017.