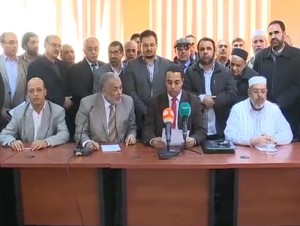 Libyan National Accord Gathering (LNAG) Monday rejected Rome conference declaration calling it interference into Libyan internal affairs while it also re-iterated its adherence to the Libyan-Libyan deal signed nearly ten days ago in Tunis.
“We denounce the way Martin Kobler, the UN-envoy to Libya, is conducting the dialogue as he gathered some parties that are not entitled to represent Libyans, and asked them to sign Leon’s draft, therefore, we shoulder the UN the responsibility for his indifferent actions.” The group said in a statement.
The statement also warned all Libyan groups or organizations inside or outside Libyan dragging the Libyan people into the hands of external forces which impose on them their foreign solutions.
The LNAG also hammered home its endorsement to the Declaration of Principle as the only way forward to end Libya’s domestic problems.
Two teams respectively from the General National Congress (GNC) and the House of the Representative (HoR) nearly 10 days ago stroke a deal called Declaration of Principle said to lay down path for Libyan settlement of Libya’s political crisis. They two teams also agreed to establish 5+5 team that is tasked with appointing a Prime Minister and two Deputies in two weeks following the deal. They also decided to form a joint committee that will ponder over Libya’s 1963 constitution deemed by the two parties as the suitable political roadmap to restore Libya’s stability four years after the killing and death of Col. Gaddafi.
In a separate development, Monday a GNC member told reporters that some members of the Tripoli-based congress received threats to sign the UN-brokered Dialogue Accord.
Abdul-Fattah Al-Shilwi, Head of the GNC Political Committee reportedly revealed that they received threats from one GNC who participated in the Rome conference to ink the agreement.
According to al-Shilwi, the Dialogue Accord sympathizers threatened to freeze their assets, issue travel ban against them, launch legal prosecution against them if they refuse to endorse the UN proposed roadmap. Al-Shilwi also bashed the Rome gathering saying that it was dictation meeting before adding that GNC will always advocate for a Libyan-Libyan political settlement.
“The GNC is pursuing what had already started regarding the Libyan-Libyan dialogue and it will not exclude the UN’s role in backing up the solution that will lead the Libyans to agreement and peace,” Al- Shilwi said.