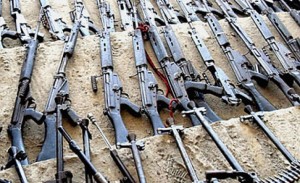 Reports of a foiled arms transaction are emerging between Ansar al-Din, a Touareg Islamist group in Mali, and a Mauritanian businessman by the Mauritanian forces stationed at Bassiknou. It is claimed that the businessman was to provide financial resources for the group to carry out its activities as it continues to control some of Mali’s northern territory.
The deal was relayed to the forces by a double agent, of the army and Al-Qaeda, but he is now going to be under custody for two months because of his links to the latter said Heina Ould Zemzam, a local trader. He added that an Ansar al-Din member was planning to sell heavy equipments seized by Ansar al-Din in the Mali through a trade mediator working for a Mauritanian businessman based in Nouakchott. The military operation to intercept the deal is reported to have been undertaken by the army patrol units stationed on the joint border with Mali near Fassala.
Mauritanian officials have deplored the situation in the neighboring country especially the security threats it poses. They share a border of more than 2,000km long and they don’t have the sufficient means to control the movement of people and goods. According to an analyst, Ibrahim Moustapha, effective border control has never been done “as it’s virtually difficult to do that because of complexity of relations between the border area populations… which is dictated by neighborly relations and mutual needs.”
Mauritania has however started to intensify its presence in strategic crossing points and Abdallah Ould Mohamedu, a dignitary of the eastern region, said it is yielding results because it “explains their (Ansar al-Din) desire to sell the assets they had seized…” in order to earn some money. Members of the group have also been frequently arrested in Mauritania.