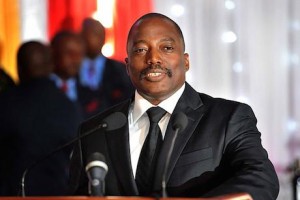 27 high-profile of Democratic Republic of Congo’s fragmented opposition have formed a coalition this weekend with the aim of ensuring that elections later next year will not be “commandeered” by the incumbent president.
“We have decided to combine our forces, our human and material resources, our strategies and our actions, to create a citizen coalition named ‘Citizen Front 2016’,” the opposition figures said in a statement.
Kabila is constitutionally barred from seeking a third term next year after winning disputed elections in 2006 and 2011.
The country’s election commission has set Nov. 27, 2016 for presidential and legislative elections, but Kabila has not commented publicly on his political ambitions despite critics’ accusations that he is attempting to cling to power.
The presidential election in November next year should be the first democratic transfer of power in the central African country of 75 million people since civil war ended in 2003.
A series of six local, provincial and national elections were originally scheduled for this year and next, culminating in the presidential vote. Elections for provincial assemblies, due Oct. 25, were missed.
Last month, Kabila called for talks with his political opponents before a series of elections in Africa’s biggest copper producer.
Opposition politicians have previously said offers of dialogue are part of a plan that would allow Kabila to maintain power.
Opposition parties such as Vital Kamerhe’s Union for the Congolese Nation and Martin Fayulu’s Engagement for Citizenship and Development have said they wouldn’t participate in such talks.

About Khalid Al Mouahidi 3616 Articles
Khalid Al Mouahidi : A binational from the US and Morocco, Khalid El Mouahidi has worked for several american companies in the Maghreb Region and is currently based in Casablanca, where he is doing consulting jobs for major international companies . Khalid writes analytical pieces about economic ties between the Maghreb and the Mena Region, where he has an extensive network