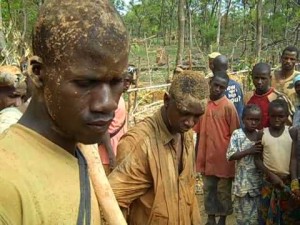 The collapse of an artisan gold mine in northeast Guinea killed at least 13 people and the death toll might rise, local officials said on Monday.
The accident happened in a mine run by informal workers in Kintinia, about 800 km northeast of Conakry.
Artisanal mining refers to activities carried out by workers not employed by a mining company, often using low technology methods or with minimal machinery.
“They were artisanal miners who took up work in a structure that had been closed,” Cheick Diallo, the governor for Siguiri province told Reporters.
“We have counted 13 bodies since the collapse a few days ago,” he said.
Guinea sits atop huge deposits of gold but the majority of its people live in poverty. Thousands of subsistence miners dig for gold in hazardous conditions in the northeast region’s small shafts, close to Guinea’s border with Mali.
The west-African nation is also one of the world’s main exporters of bauxite and holds vast untapped iron ore reserves that have lured large global miners, such as Rio Tinto and Chinalco.