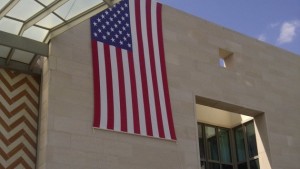 The American Embassy in Tunisia says it has received information on possible terrorist attacks in the Tunisian capital, Tunis, and urges its citizens to stay away from the Mall in Berges du Lac area.
The Embassy gave no further details. But Tunisia security forces have been on high alert since the 24 November suicide bombing that killed 12 presidential guards as they boarded a bus to start their tour of duty.
It was the third major attack in Tunisia this year after an Islamist militant killed 38 foreigners at a beach hotel in the resort of Sousse in June, and gunmen killed 21 tourists at the Bardo Museum in Tunis in March.
Islamic State claimed responsibility for both those attacks.
Fighting Islamist militants has become a major challenge for Tunisia, a small North African country that was hailed as a blueprint for democratic change in the region after an uprising in 2011 ousted autocrat Zine Abidine Ben Ali.
The army has been fighting against another armed group in the mountains near the Algerian border. But several thousand Tunisians have also left to fight in Syria, Iraq and Libya with Islamic State and other militant groups, and some have threatened to carry out attacks at home.