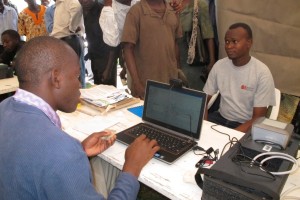 The Kenyan Independent Electoral and Boundaries Commission (IEBC) on Tuesday said it is working towards registering eight million new voters ahead of the next year General Election.

The Electoral Body is to launch a major countrywide campaign next month targeting at least four million new voters, after it emerged that the ongoing registration attracted only 156,000 new voters.

If it meets the target of eight million, the number of registered voters in the country will increase to 22.4 million.

The commission, led by Issack Hassan, said it had presented a budget to the Treasury for its electoral activities up to 2017, but admitted that lack of enough funds could affect the planned voter registration exercise.

The National Treasury allocated the commission Sh500 million for voter registration against a request of Sh2 billion ($ 300 million).

According to Hassan, his institution has ruled out buying more bio-metric voter registration (BVR) kits due to lack of sufficient funds.

“Due to the financial constraints we cannot buy more BVR kits and despite the challenges, we are ready to conduct a free and fair election,” Hassan told reporters.

He also urged politicians to mobilize their supporters to register.