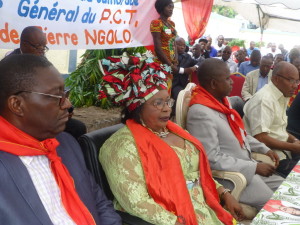 The members of the investiture commission of the Republic of Congo’s ruling party are expected to propose a presidential candidate for the March presidential election on Monday.

Denis Sassou Nguesso has been tipped favourite by many within the party who will consider failure to choose him as a big surprise.

He has the chance to stand this year’s election after amending the country’s constitution through a referendum in October 2015.

The opposition called for a boycott of the poll and one of its leaders described the official results as a “fraud.”

In late September, thousands of people demonstrated in a rare protest in Brazzaville.

Slogans such as “Sassou out!” echoed through Brazzaville’s central Boulevard as some protesters carried banners reading “Sassoufit,” a word game that means “that’s enough” in French, the nation’s official language.