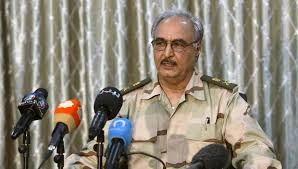 Forces loyal to the Tobruk-based government are progressing in their fight against Islamic State militants in Benghazi with reports saying that they have taken over the key districts of Boatni, Laithi. Residents celebrated the advances of the military headed by General Haftar whose role in post-war Libya continues to be a burning issue. Clashes between the military and the extremist groups have been going on for three days and a hospital source said there are at least 20casualties.

As the Islamic State is on its back heels in Benghazi, reports have emerged that it is entangled in another clash in Sabrantha. The mayor of the city, Hussein al-Thwadi said military brigades attacked several buildings housing suspected Islamic State militants and four brigade members had been killed and five injured. Details are still sketchy.

Meanwhile, the hope to establish a national unity government under the U.N-led Libya Political Agreement is proving to be a daunting task as vote of confidence session at the House of Representatives (HoR) was postponed.

An official statement from the parliament stated that the decision was due to a lack of quorum but Libya Herald citing sources reported that the Cyrenaican / Federalist anti Government of National Accord (GNA) minority disrupted the proceedings of the session. Several monitored reports had members of parliament claiming different reasons for the postponement of the session to Monday although some are doubtful if it will take place.

Among the dividing issues is also the agenda of the parliament with some of the lawmakers demanding that the political agreement sealed in Morocco should be voted on first on the basis on the 2011 constitution before the vote of confidence of the proposed government can be held.