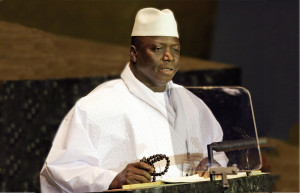 Gambian President Yahya Jammeh on Sunday said he will run for a fifth term in office when the country holds presidential elections in December 2017.

In a report broadcast by the West African nation’s state television, Jammeh who has been in power for a little over two decades said his candidacy was approved by the ruling party, Alliance for Patriotic Reorientation and Construction.

Presidential election will take place in Gambia on December 1 and will be followed by general elections on April 6, 2017.

Jammeh, 50, has been president of the tiny West African country since 1994.

The former British colony’s government has been regularly criticized by Britain and other Western powers for human rights abuses.

Jammeh, an animated orator who has earned the reputation for making surprise declarations over the course of his 22-year presidency, pulled the Gambia out of the Commonwealth in 2013, calling it neo-colonial. In 2007 he claimed to have found an herbal cure for Aids.

The European Union temporarily withheld aid money in 2014 over the country’s poor human rights record. The Gambia, whose main industries are agriculture and tourism, ranks 165 out of 187 countries on the UN development index.