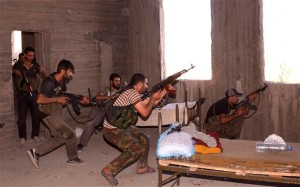 Iran has confirmed the presence of its ”military advisors” in Syria and neighboring Lebanon. It is really a scary thing because these aides, who are providing assistance to Assad regime and to Lebanese militant Shiite group of Hezbollah, are not ordinary consultants. They are members of Al Quds forces, an elite unit of the Iranian Revolutionary Guard Corps (IRGC). The Al Quds forces, a paramilitary undercover group, are tasked with exporting Iranian ideology abroad.
According to Iran’s top General Mohammad Ali Jafari, these high-level advisors have been operating in Syria and Lebanon for a long time without giving more details. It seems that Tehran has finally come clean, confirming what it has long been suspected doing behind the scenes: proxy war that is already reshaping the whole Middle-East region in this Arab Spring era.
For Gen. Jafari, the Al Quds forces give for the time being the Syrian regime advice in a number of areas in which Iran has experience but warns that this could change at any time depending on the circumstances and if Syria were attacked militarily.
Iraq’s fugitive Vice President Tareq al-Hashemi, a top Sunni politician, has accused the Shiite-led government of Prime Minister Nor Al-Maliki, of turning the blind to Iran’s use of Iraqi airspace to fly weapons et militia fighters to Assad’s killing machine, supported by Russia and China.