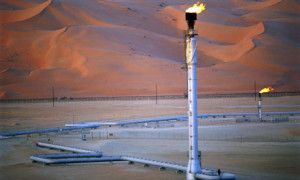 The to-be developed oil fields are found in area 47 which has received the commercial approval of the Libyan government in December. An amount of 18 oil wells have been discovered in the area and they will be exploited by Medco Energi Internasional and the Libyan Investment Authority (LIA).

The stakes of the joint operating company will be divided between three institutions; namely the Libyan government, the Libyan Investment Authority and Medco Energi Internasional with 50% of the stakes accorded to the government and the remainder will be shared among the other two respectively.

Medco president director, Lukman Mahfoedz, said the joint venture will cost US$800 million. Medco will invest US$200 million in the project, funded by internal cash and bond proceeds. He added the project has been in the preliminary engineering stage and it will produce 50,000 barrel oil per day. Production is furcated to begin in 2015. The project according to him was planned during the reign of Ghadaffi but the outbreak of the political conflict which late uprooted him delayed it.

Medco Energi is the first Indonesian company operating in the oil & gas exploration and production business listed in Jakarta Stock Exchange since 1994.  And it is trying to stand out at the international stage as it focuses on Oil and Gas, power generation and renewable fuels. Less then two weeks after the ruthless aasasination of US ambassador in Lybia, this new oil exploitation is interpreted as a positive signal by libyan authorities, who were fearing disinvestment.