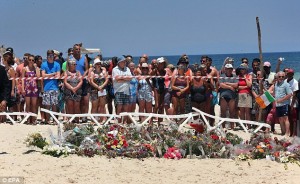 “A training team of some 20 troops from the 4th Infantry Brigade is now moving to Tunisia to help counter illegal cross-border movement from Libya in support of the Tunisian authorities,” Fallon said in the House of Commons

“With Daesh terrorists determined to target civilians wherever they can, this training will help Tunisian forces to increase their border security. It underlines our commitment to peace and security in the region.”

According to the Daily Mail, the troops were moved in Tunisia early February at the request of Tunisian authorities who are struggling to stop the flow of IS fighters crossing from Libya into Tunisia to perpetrate attacks.

The Daily adds that the troops, during their two-month mission, will provide mobile patrolling and surveillance training in Tunisia. The training also involves classroom and practical exercises, which will assist the Tunisians to better guard their land borders, the Daily says.

UK’s support came following killing of 30 British tourists last year at Sousse by an IS-trained young Tunisian. The attack prompted the Foreign Office to advise its nationals not to visit the North African country. As a result thousands of the British holidaymakers left Tunisia plunging the tourism industry into abyss.

Fallon also told the House members that he gave the go-ahead to US air forces to launch attacks on IS fighters in Sabratha, West of Libya, on February 19, attacks which reportedly killed Noureddine Chouchane, a notorious Tunisian terrorist who allegedly facilitated Bardo and Sousse attacks.

Fallon pointed out however that British troops will not engage in ground fighting in Libya but London stand ready to assist on an invitation by the new Libyan government and also after consulting the British parliament.