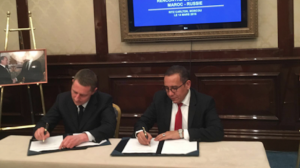 Morocco and Russia have pledge to strengthen Africa’s positions in the international relations system and to join efforts to spur the continent’s development through a triangular cooperation.

The two countries made their pledge during the official visit King Mohammed VI is currently paying to Russia.

A statement issued Tuesday after the talks held by the King and President Vladimir Putin said that the two countries “expressed their commitment to strengthening the positions of Africa in the international relations system.”

“They intend to cooperate closely on issues related to the economic development of African states, particularly in the partnership Morocco-Russia-Africa,” the statement said, adding that Russia and Morocco “attach great importance to the Sahara-Sahel region in the security system of the African continent.”

The two countries which consider their strategic partnership “a positive and constructive contribution to strengthening regional and international stability” also called for the implementation of the UN Integrated Strategy for the Sahel.

King Mohammed VI’s visit to Russia was crowned by the adoption of the Statement on the Extended Strategic Partnership between the Russian Federation and the Kingdom of Morocco and the signing of several intergovernmental agreements.

The two countries also signed a statement on combatting international terrorism, wherein they stressed the need to strengthen international cooperation to combat terrorism and violent extremism under all their forms.

They also called for strengthening the central role of the United Nations in the fight against international terrorism, transnational organized crime, corruption and other criminal challenges.

The Kingdom of Morocco welcomed on this occasion, the initiative of Russian President Vladimir Putin, to establish “the broader front against terrorism on the basis of international legal standards and the United Nations Charter and that will operate with the consent and close coordination with the States who bear the burden of the fight against extremists and terrorists, says the Declaration.

Analysts say that Moroccan-Russian anti-terrorism cooperation will undoubtedly benefit African countries which are increasingly threatened by the scourge of terrorism.

Other joint documents signed on Tuesday deal with cooperation in energy, geological prospecting and development of mineral resources, tourism, cooperation in Islam and religious training, as well as cooperation between the Kremlin Museums and the State Hermitage Museum and Morocco’s National Museums Foundation.

In this vein, King Mohammed VI inaugurated, Wednesday, at the Pushkin Museum in Moscow, the exhibition “Morocco-Russia: a shared ancient history.”

The exhibition, organized by the Moroccan foundation showcases the long and rich history of the kingdom of Morocco, displaying bronze objects from ancient Roman sites in Morocco as well as Roman sculptures, and other items. The exhibition to run until April, 16th will undoubtedly interest the Pushkin Museum’s 5,000 daily visitors.

Before the dedication of the exhibition, King Mohammed VI held a meeting with Russian Prime Minister Dmitry Medvedev. The meeting was attended by several Moroccan and Russian ministers and senior officials.