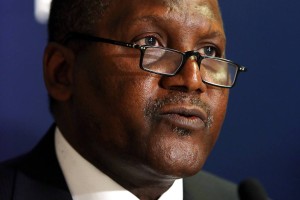 The richest man in Africa, Nigerian Alhaji Aliko Dangote on Friday denied having any dealings with Mossack Fonseca.

The move comes days after internal data of the Panama-based offshore-provider, Mossack Fonseca, obtained by the German newspaper Süddeutsche Zeitung and shared by the International Consortium of Investigative Journalists (ICIJ) said Dangote, his relative, Sayyu Dantata, as well as his business allies have over the years used shell companies domiciled in controversial tax havens in their business transactions.

Dangote has become one of several high-profile Nigerians— including Senate President Bukola Saraki and disgraced former Delta state governor James Ibori—to be implicated in the leak, which exposed how the world’s rich and famous use offshore facilities and shell companies to hide their wealth.

According to the Dangote Group spokesperson, Tony Chiejina neither Aliko Dangote nor Dangote Industries Ltd. has any form of relationship with these alleged four offshore companies.

“The group has four quoted companies on the Nigerian Stock Exchange and we cannot afford to tarnish our reputation or conduct our business in an unethical manner given this profile.”

Local reports say there is no evidence that Dangote used the companies for illicit purposes.

With a staggering $15.4 billion wealth, Nigeria’s businessman and industrialist, Aliko Dangote, is on Forbes Rich List as the richest man in Africa.