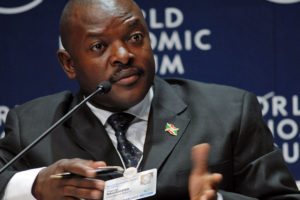 Officials in Burundi on Tuesday said unidentified gunmen killed five people and left seven injured in an attack on a market in the eastern part of the country, close to the border with Tanzania.

“The criminals fired into the crowd before fleeing, they left a total of five dead and seven wounded,” local government district head Aloys Ngenzirabona said on Tuesday.

The unidentified gunmen are believed to be associated with exiles in Tanzania led by a former presidential spokesman. The spokesman was fired last year for advising President Pierre Nkurunziza not to seek a third term.

The country has been plunged for nearly a year in a deep political crisis, revived by the desire of President Pierre Nkurunziza to stay in power for a third term.

The violence has claimed more than 400 lives and forced more than 250,000 people to leave the country.

Last week the International Organization of La Francophonie (OIF) has partially suspended its multilateral cooperation with Burundi due to “lack of progress” of political dialogue.

Members of the Permanent Council of the OIF deplored the deterioration of the security situation and absence of progress in the establishment of a truly inclusive political dialogue despite significant continued efforts by the international community.