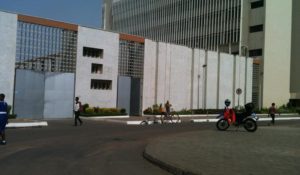 “My focus is to work assiduously to achieve our core responsibility of ensuring price stability,” Issahaku told reporters in capital city, Accra.

Ghana, a net exporter of gold, cocoa and recently oil saw its gross domestic product growth fall from around 14 percent in 2011 to 4.1 percent last year, partly because of a global slump in commodity prices.

The government expects inflation to ease further in the coming months, as Ghana’s central bank continues to tighten its fiscal policy measures.

The tightening of the fiscal policy is firmly boosted by a $918 million three-year International Monetary Fund (IMF) program the country adopted in 2015 to revamp growth and boost job creation.

The local currency (cedi) is expected to trade at 3.85 against the dollar by the end of this month, according to analysts, and trade at 4 cedi in a year, but is projected to settle at 3.05 by 2020.

Dr Nasiru Issahaku was appointed to the position last week following the early retirement of Dr. Kofi Wampah four months before the end of his tenure on August 05, 2016.