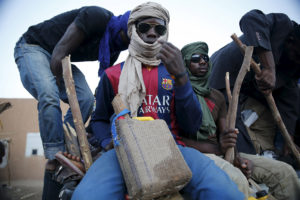 Landlocked Niger, ranked as the poorest country on earth by the United Nations, is a major transit country for Africans seeking to reach the European Union.

According to the International Organization for Migration (IOM,) a record 150,000 migrants are expected to cross Niger’s Sahara Desert this year into Libya, taking advantage of the chaos in the North African country that has given smugglers an open door to Europe.

The European Union believes just over half the migrants arriving in Italy travel first through Niger. About one thousand migrants have drowned in the Mediterranean this year and Europe is looking to Niger for action.

“We’ve solicited the help of the European Union, France and Germany. We want to protect legal migration against clandestine migration,” Yacoubou said.

Last July, the European Union allocated €1.15 billion in aid to West Africa, part of which was destined to the fight against migration.