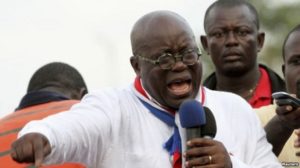 The Flagbearer of the NPP made the statement Monday at the inauguration of the South African branch of the NPP.

He said the country under President Mahama has been so badly managed that in-spite of all the oil revenue his government has harvested, Ghanaians are poorer than ever before.

“Today in Ghana, for the ordinary Ghanaians, the cost of electricity is higher than the cost of the rent and they can’t afford to pay,” he lamented.

“Businesses are collapsing, unemployment is at the highest ever in our history, the national health insurance scheme has collapsed, and the educational sector is having great difficulties. Especially for those of us in political office or any prominent office, you have to run away from your house,” the opposition leader stressed.

He called on Ghanaians to vote out President Mahama in the November polls saying “we cannot continue like this because we have both the human resources and the material resources to do so much better for our country than what is going on now.”

Ghana’s economy expanded 3.9 percent last year, about the same pace as a year earlier, and near the slowest in 20 years on a drop in oil prices and slumping cocoa production.

The West African nation’s economy is struggling as soaring inflation and limited revenue from low crude and gold prices are straining the budget in the world’s second-largest cocoa producer.

The government expects the economy to expand 5.4 percent in 2016, according to Finance Minister Seth Terkper.

President Mahama is trying to get the economy back on track before the presidential election in November.