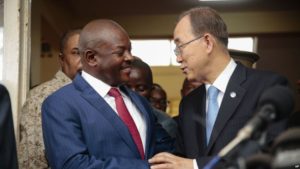 The United Nations in Burundi has completed the deployment of a team of human rights monitors to investigate allegations of human rights abuses in the chaotic East African nation.

The investigation team is expected to make recommendations on how to improve the human rights conditions in the country and also meet with Burundian refugees in neighboring countries like Rwanda, Uganda, Tanzania and the Democratic Republic of Congo to collect more evidence.

Burundi was plunged into crisis last year following Pierre Nkurunziza’s bid for a third term which was considered by his critics as unconstitutional.

About 450 people have been killed and more than a million displaced following the year-long violence in the country.

In the latest attack in the capital Bujumbura on Wednesday, a retired army colonel was shot dead and his son wounded, police said.

The former officer, named Lucien Rufyiri, was shot as he sat in his car waiting for his gate to be opened in the Ngagara neighborhood.

A new round of peace talks was launched in the Tanzanian city of Arusha at the weekend.

The full operation of the UN investigation mission counts on information from individuals, groups and organizations on the human rights violations and abuses, which have been taking place in Burundi since the crisis started last year.