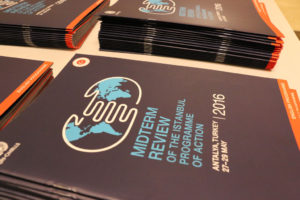 The progress made by the world’s 48 least developed countries (LDCs) is being assessed at a United Nations conference that kicked-off Friday in Antalya, Turkey.

The conference, a Midterm Review of the ten-year Istanbul Program of Action (IPoA,) will also explore ways of accelerating these LDCs’ path towards sustainable development, says a UN statement.

IPoA was adopted in 2011 to give impetus to economic and social development in some of the world’s most vulnerable States.

The three-day event will focus on how LDCs have experienced some progress in areas including poverty reduction, child mortality, gender parity and access to internet and mobile networks. Economic growth has also been strong even though its pace has been more volatile and below the average of the last decade. There has also been an increase in the number of countries fulfilling criteria, which will lead towards graduation from their status as an LDC.

“Least developed countries have seen significant progress and are a major human and natural resource potential for the world, but more needs to be done to support them,” said Gyan Chandra Acharya, the UN High Representative for LDCs, Landlocked Developing Countries, and Small Island Developing States, before the Midterm Review conference.

“This event is a major opportunity for the international community to come together and reaffirm global commitments that were made in 2011 to ensure that the world’s poorest nations are at the forefront of efforts to build an inclusive and sustainable future for the world,” he said.

Echoing him, Administrator of the UNDP, Helen Clark, said “This is an important opportunity to focus on the special needs of LDCs, and to assess the status of implementation of the IPoA.”

“Despite important progress, however, significant challenges remain: 51 per cent of the population of LDCs live in extreme poverty, and 18 million children of school age are not in school. Despite LDCs having 12.5 per cent of the world’s population, their exports account for only 1.1 per cent of the global total,” she noted.

The opening session of the Midterm Review conference brought together high-level representatives and over two thousand stakeholders from governments, international and regional organizations, civil society, the private sector, foundations, think tanks and the media.