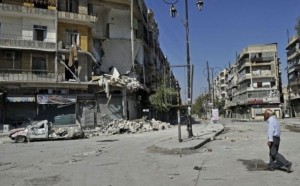 As international pressure keeps mounting on Assad to hand over power coupled with accusations of using cluster bombs and threatening to use chemical weapons which it has denied; it is now willing to give an opportunity to a ceasefire.
According to the foreign ministry spokesman, Jihad Maqdisi, the government is “interested in exploring” a ceasefire in accordance with the proposals of Lakhdar Brahimi, the international envoy to Syria’scrisis which has been dragging for 19 months. He swiftly added that such an agreement could only be implemented with the collaboration of the rebels because “in order to succeed in any initiative, it takes two sides.” He believes that influential countries can play a major role in concluding this agreement. “Will they pressure the armed groups that they host and finance and arm in order to abide by such a ceasefire?” he quizzed.
Lakhdar Brahimi has been crisscrossing the region in recent days to seek support for his proposal of a ceasefire in Syria during the Islamic holiday of Eid al-Adha which is barely 10 days away.  Skeptics believe it is destined to fail because Kofi Annan tried a similar plan before being frustrated then resigning. “The idea is that this ceasefire could open the door to something more sustained,” a Western diplomat said and cited that “it’s not clear how realistic this idea is because Annan tried and failed to do the same thing.” UN’s secretary general is urging for a unilateral ceasefire, a proposal that has not been very welcomed by the Syrian regime.
If Brahimi is successful in brokering a ceasefire, the U.N. Department of Peacekeeping Operations is willing to put together a force of up to 3,000 monitors who would separate the warring sides to ensure that fighting does not resume, diplomats said.