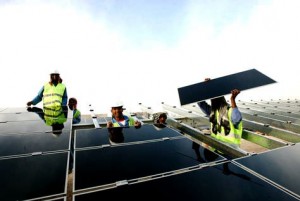 A 15-megawatt solar power project capable of ensuring 10% of the country’s electricity demand has been announced in Nouakchott by the government and Masdar, an energy company in UAE. It is the first of its kind in Mauritania. The project will provide an annual demand growth in the country, estimated to be at a rate of 12% in 2012.
Taleb Ould Abdivall, Mauritania’s Minister of Petroleum, Energy and Mines said he was pleased with the partnership with Masdar whom he said have gathered vast experiences in renewable energy resources and hopes that they will continue collaborating for future projects. He also said that Mauritania is “an ideal place for solar power installations” because it “has some of the highest levels of solar radiation in the world.”
Mauritania has a low electrification rate of 60% and therefore goes through severe energy shortages. The announced project which is part of Masdar’s commitment to the ‘United Nations’ Year of Sustainable Energy for All’ which aims at ensuring universal access to modern energy services and will also help Mauritania satisfy its energy demands. The country though has an installed grid capacity of just 144 megawatts, supplied mostly by diesel generators, but the country has significant untapped renewable energy potential in the form of both solar and wind; the latter’s potential alone quadruples annual national energy demand.
Dr Sultan Ahmed Al Jaber, chief executive officer of Masdar said the project attests “that energy access and commercially viable renewable energy can go hand-in-hand” and added that partnerships play an important role in the company’s business strategy.
Upon completion, the plant will be owned and operated by the state-owned Société Mauritanienne de l’électricité (SOMELEC), and will be used as a learning laboratory for solar energy development by local university students.