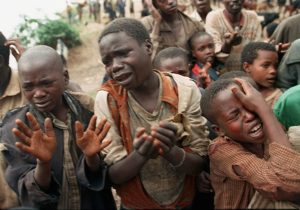 Two former Rwandan mayors were sentenced to life imprisonment on Thursday by a Paris court on charges of orchestrating the massacre of hundreds of Tutsis during the 1994 genocide.

Tito Barahira, 65, and Octavien Ngenzi, 58, were found guilty of crimes against humanity and genocide.

More than 100 victims, relatives and witnesses, some of whom having travelled from Rwanda, testified during the eight-week Paris trial. Unusually, the trial was recorded for historical purposes.

During the eight-week trial, prosecutor Philippe Courroye, who requested life sentences for the two men, described the pair as “executioners”; Ngenzi being the “leader” and Barahira the “dreaded machete officer.”

A lawyer for the civil parties in the case, Gilles Paruelle, said: “To kill one man, hatred is sufficient. To kill 1,000, you need organization.”

Both men had denied any involvement in the killings.

This trial is the second held in France for suspected perpetrators of the Rwandan genocide, under a special U.N.-approved resolution allowing France to try culprits of the genocide and other related crimes. The law came after years of efforts by activist groups, which denounced the fact that crime perpetrators live in France unpunished.

The first probe to be handled by the specialized war crimes units was that of former army captain Pascal Simbikangwa, 54, who was sentenced to 25 years in solitary confinement in 2014 over his role in the genocide.

Some 800,000 people, mostly ethnic Tutsis, were killed by Hutu extremists during the three months of the Rwandan genocide in the spring of 1994, according to U.N. figures.