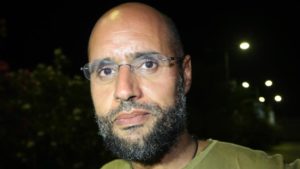 Released, not released. Contradictory reports on Saif al-Islam’s liberation from jail continue to emerge. While Zintan militia officials have denied the liberation of the most wanted Libyan personality, his French lawyer confirmed to French RFI Friday that his client has been freed and is staying in Zintan.

Ceccaldi affirmed that his client was no longer detained in Zintan as it was reported.

Ceccaldi’s comments confirmed those of Khaled Zaydi, another lawyer of Saif who, on Wednesday, indicated that the son of the former Libyan leader was freed in April. The information was relayed by international media before it was debunked by some officials of Zintan militia that had arrested Saif in 2011 near the borders with Niger.

The Qatari and London-based media New Arab on Friday also confirmed the release of Saif citing the chief of the detention centre where the wanted man was kept.

Analysts say Zintan authorities who in 2015 refused to hand Saif to Tripoli authorities are dragging-foot to confirm his release out of fear to irk Libyans who wanted him to be killed.

Saif al-Islam was tried and sentenced to death in absentia in Tripoli last year for the killing of protestors during the 2011 revolution which deposed his father. He is also wanted by the International Criminal Court (ICC) for crimes against humanity charges.