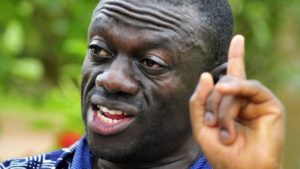 Ugandan opposition leader, Kizza Besigye, was released on bail Tuesday, two months after he was arrested and jailed over treason charges.

A long-standing opponent of President Museveni, Besigye has been repeatedly teargassed, beaten, hospitalized, jailed and accused of rape. He faced treason charges in 2005, but his case was later dropped.

Besigye claims he won the 18 February presidential elections. However, official figures from the Electoral Commission show, veteran leader President Yoweri Museveni won the elections with 60.8% of all the votes cast while Besigye came second after pulling 30.5%.

The vocal opposition leader, who had been under house arrest for much of the time since the poll, was again charged with treason on May 13. Prosecution also alleges that the leader incited people to overthrow the government in Wakiso and Kampala on two occasions (February 18 and May 11).

Besigye requested release on bail on July, 11. “Having weighed all the circumstances and factors one after the other, I am inclined to grant bail to the applicant,” the High Court judge Wilson Masalu Musene said.

Treason is a capital offence in Uganda, but the death penalty has not been carried out for years.