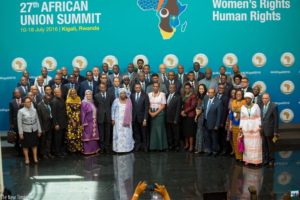 The Come-Back of Morocco

The highlight of the 27th summit of the African Union (AU) held in the Rwandan capital, Kigali, was Morocco’s official call for regaining its seat within the pan-African organization it quitted 32 years ago.

“It has been a long time that our friends have been asking Morocco to take back its seat in its natural institutional place (AU), and now the time has come,” Morocco’s King Mohammed VI said in a historic message addressed on Sunday to the 27th summit of the African Union held in Kigali, Rwanda.

In his message, King Mohammed VI made a strong case in favor of Morocco’s commitment to Africa and stressed the need for a neutral African Union in line with international legality.

The royal message was followed by a motion submitted on Monday by 28 African nations to the President of Chad Driss Deby who holds the rotating presidency of the African Union.

The 28 signatory countries of the motion described the admission of the pseudo-Sahrawi Republic as a regrettable event. They stressed the need to mend such an error by suspending the membership of the separatist Polisario and enabling the “legitimate return” to the African Union of Morocco.

They underscored that the suspension of the SADR will pave the way for the AU to positively contribute to the UN efforts to find a lasting settlement to the regional dispute over the Sahara.

As suggested by the AU’s 2063 agenda, the African passport has finally been launched and the first two copies issued.

Dr. Dlamini-Zuma said even though the initial plan was to issue the passports to Heads of State, Foreign affairs ministers and top diplomats, the AU had been overwhelmed by calls from many who want to share in the privilege of holding African passports.

‘‘The Heads of State have asked us to carry on our duties till the next elections in Jan 2017. We’ll just do that,” Zuma confirmed during remarks at the closing ceremony of the summit.

AU Member states have agreed during the summit to fund 100% of the operations of the body instead of relying on donations from foreign countries.

The new plan, which will start in 2017, will see 0.2 percent of member states eligible imports go to funding the AU Commission’s programs.

The leaders and their representatives have in the past been finding ways of addressing the body’s funding gap, which they have agreed has been a handicap for its operations.

At present, the bloc sources only 28 percent of its half-billion dollar operational budget from its own members. It has to source an additional $750 million for peacekeeping operations with the funding gap filled mostly by the European Union, United States, World Bank, China and Turkey.

AU to pull out of the ICC

The African Union Advisory Committee, tasked to come up with a joint position on the International Criminal Court (ICC,) has recommended that the union pull out of the court, which it accused of lacking objectivity.

The committee recommended that AU member states quit the ICC unless it meets three conditions, including giving heads of state immunity from prosecution.

The Hague-based court was accused by AU officials of bias toward African countries and lacking fairness. With 10 active investigations, only one is outside Africa.

The 27th AU Summit was held under the theme: “2016: Year of Human Rights with a particular focus on the Rights of Women”.