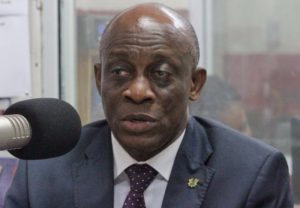 Ghana has revised downwards its economic growth forecast for 2016, the West African nation’s minister of finance told reporters on Tuesday.

The country’s GDP growth for the year is expected to be 4.1 percent compared to the initial figure of 5.4 percent.

Lower export prices and irregular oil production led to the revision of the forecast, Seth Tekper told journalists in the capital Accra.

“These developments have taken into consideration the release of revised GDP figures for 2015, revision of gold production forecasts for 2016-18, and the shutdown of the (oil production vessel) FPSO Kwame Nkrumah,” Terkper said.

Ghana, which also produces cocoa and gold, is following an International Monetary Fund program to restore fiscal balance and spur growth, which dropped to 3.9 percent in 2015 from 14.4 percent in 2011, a year after it began producing oil. Non-oil GDP was expected to grow by 4.6 percent, he said.

A month ago, government statistician Philomena Nyarko told reporters that mining and fishing subsectors of the economy contracted in the first three months of 2016 while power, communication and water recorded double digit growth year-on-year.

Ghana’s annual producer inflation went up marginally to 11.3 percent in May from 11.2 percent the previous month, driven mainly by rising gold prices and a marginal depreciation of the local currency.