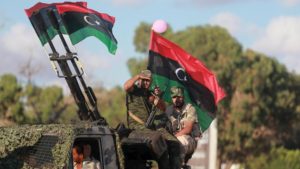 In Libya, about 205 people have been killed, including 18 civilians, and 913 wounded in two weeks of fighting near the capital city Tripoli.

About two weeks ago, Eastern Libyan commander Khalifa Haftar ordered his troops to march on the capital Tripoli, taking his conflict with the internationally recognized government to a dangerous new level.

With UAE and Egypt supporting Haftar while Turkey and Qatar are supporting the internationally-recognized government, the conflict in Libya is turning into a proxy war between regional powers, expert say.

According to World Health Organization (WHO), Haftar troops had come within 25 miles of the city and a powerful rival militia was racing to stop them.

Personal envoy of the Head of the UN-backed Government t of National Accord, Jomaa al-Qamati, who was on a visit to Rabat Wednesday said the UN-brokered agreement inked by Libya’s warring factions in the Moroccan coastal town of Skhirat in 2015 remains the framework and the basis of any political settlement in Libya.

He told the media after a meeting with Moroccan Foreign Minister Nasser Bourita that the historic inter-Libyan dialogue in Skhirat was a crucial phase in promoting national reconciliation and political consensus.

The libyan envoy stressed the need to end the cycle of violence and resume the peace process on the basis of the Skhirat agreement which sets the foundations of a civil, constitutional and democratic state, based on the rule of law.

“The solution in Libya is political and not military”, he stressed, calling the international community to act to end the cycle of violence in his country.

Nasser Bourita expressed Morocco’s concern over the latest developments in Libya and called on all Libyan parties to cease hostilities and engage in political dialogue to overcome all obstacles.” The military option can only further complicate the situation” in this Maghreb country, he said.

The United Nations secretary general, António Guterres, who is trying to push an international peace deal, condemned the military escalation and ongoing fighting in and around Tripoli. He called for restraint and urged all parties to engage in immediate dialogue to reach a political solution, insisting that there is no military solution to the Libya conflict.

Washington expressed deep concern about fighting near Tripoli. “We oppose the military offensive by Khalifa Haftar’s forces and urge the immediate halt to these military operations against the Libyan capital”, said a spokesman of the US State department, warning that this unilateral military campaign against Tripoli is endangering civilians and undermining prospects for a better future for all Libyans.

After former leader Colonel Muammar Gaddafi was murdered in October 2011, Libya spiralled into a full-blown civil war and humanitarian catastrophe, marked by the prevalence of open-air slave markets trafficking migrants from sub-saharan Africa and the surge of terrorism.

The North African oil-rich nation has been divided between the Western-backed government in Tripoli and a parallel administration allied to Haftar.

Posted by Hafid El Fassy on April 18, 2019. Filed under News, Zoom. You can follow any responses to this entry through the RSS 2.0. Both comments and pings are currently closed.