China Yunhong Group to invest over $300 million in Burkina Faso 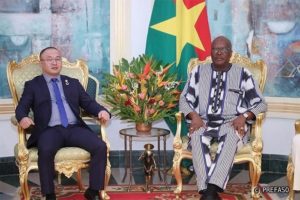 In Burkina Faso, Chinese industrial giant, China Yunhong Group plans to invest about 200 billion FCFA (about $336.6 million) over the next five years in the West African nation.

The information was disclosed during a meeting between the company’s CEO, Li Yubao, and President Roch Marc Christian Kaboré.

Li Yubao said his group’s planned investments will mainly be channeled to the sectors of agriculture, mining and health.

In this connection he unveiled that the group plans to install a pharmaceutical plant in Burkina Faso and make the country the center of its activities in Africa.

Posted by Emmanuel Agbenonwossi on August 2, 2019. Filed under Business, Finance, News, Zoom. You can follow any responses to this entry through the RSS 2.0. Both comments and pings are currently closed.