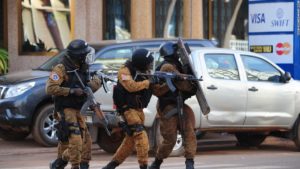 In Burkina Faso, Islamic State claimed responsibility for one of the deadliest attacks against the military of the West African nation in recent months.

According to SITE, a website that tracks militant activities in the region, the attack took place on Aug. 20 in Koutougou, in the country’s northern Soum province. Militants killed 24 Burkinabe soldiers and injured seven others.

A statement from Islamic State quoted by SITE attributed the attack to the group’s West Africa branch.

Burkina Faso is in the grips of a dangerous threat from armed Islamist fighters who are murdering civilians and threatening to destabilize other West African countries.

There was a surge in unclaimed attacks in the country in 2018 and this year. This was apparently linked to the infiltration and recruitment by elements allegedly associated with the Islamic State in the Greater Sahara (ISGS) in the border area spanning Burkina Faso, Niger, Benin, Togo and Ghana.

Since the 2013 French Serval and Chadian operations to uproot ‘jihadists’ from the region, the number of violent extremist groups in the Sahel has risen, and new coalitions have been formed.

Posted by Emmanuel Agbenonwossi on September 20, 2019. Filed under News, Zoom. You can follow any responses to this entry through the RSS 2.0. Both comments and pings are currently closed.