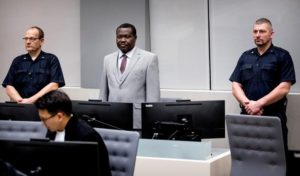 Shortly before the hearing, prosecutors published a charge sheet alleging Patrice-Edouard Ngaïssona was one of the most senior leaders of Christian-dominated militias, while Alfred Yekatom was a commander in the same force, during fighting in 2013-2014.

The Central African Republic has been mired in violence since a coalition of mostly northern and predominantly Muslim rebels known as Seleka seized power in March 2013. Their brutal rule gave rise to the Christian militias, who opposed them.

“They knew that mobilizing and using anti-Balaka (Christian) groups fueled by vengeance and hatred of Muslims … and transforming them into a formidable fighting force would, in the ordinary course of events, result in the violent targeting of the Muslim civilian population in western Central African Republic,” the charge sheet said.

Posted by Emmanuel Agbenonwossi on September 20, 2019. Filed under News, Zoom. You can follow any responses to this entry through the RSS 2.0. Both comments and pings are currently closed.