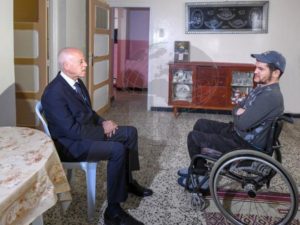 Tunisian President visited on Tuesday visited young Khaled Ben Nejma, one of the wounded in the 2011 Revolution, at his home in Ras Jebel, Bizerte Governorate.

Khaled Ben Nejma was hit by three bullets and paralyzed on January 13, 2011.

The Head of State spoke with the young man and asked about his health and situation. He reaffirmed his firm commitment to closely monitor the health and social situation of the people wounded in the Revolution and all Tunisians, especially the most disadvantaged.

The meeting was an opportunity to highlight the courage and bravery of the Tunisian youth during the Revolution and to hail their sacrifices to defend the homeland, the Presidency of the Republic said in a press release.

President Saïed also praised the efforts made by doctors and paramedics in various hospitals to save lives during the revolution.

He reiterated his faith in young people, who, he said, played an important role in the Revolution and paved the way for the establishment of the democratic process in Tunisia.

Posted by Khalid Al Mouahidi on January 15, 2020. Filed under Lifestyle, News, Zoom. You can follow any responses to this entry through the RSS 2.0. Both comments and pings are currently closed.