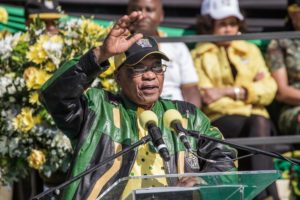 South African President Jacob Zuma on Monday urged all registered voters of the country to cast their ballots in the local government elections to be held on Wednesday, August 3.

According to Jacob Zuma, the elections were poised to be the largest in the country’s history and that voting was a precious right as the “victory over apartheid and the right to vote by all South Africans was not an easy achievement.”

In his words, “We are encouraged that for the first time in our history, this election will see 200 political parties and over 61,000 candidates participating, which reflects the maturity of our democracy that continues to reflect the will of the people.”

Surveys, ahead of the Aug. 3 municipal vote, show the pro-business Democratic Alliance will come ahead of the ANC in the economic hub Johannesburg, Medafricatimes’ journalist Emmanuel Agbenonwossi reports from Soweto.

Pressure is also building from the left, where the Economic Freedom Fighters led by former ANC youth leader Julius Malema are drawing in voters with the promise to take back white-owned mines and farmland.

With a stagnant economy and widespread corruption allegations that have put the African National Congress on the defensive ahead of the local elections, Julius Malema could push the party that has ruled since apartheid’s end out of power in South Africa’s most important cities, Emmanuel Agbenonwossi said. The outcome of the poll remains far from certain.

The leader of the EFF, Julius Malema, known within party circles as “Commander-in-Chief,” on Sunday, talked about his vision of providing free water and electricity as well as better housing conditions for struggling South Africans.

Jacob Zuma’s second term ends in 2019 and he is not eligible to run for president again.

Note that the official unemployment rate in the country stands near 27%, with more than half of workers under the age of 35 looking for a job. The South African central bank expects the economy to stagnate this year and expand just 1.1% in 2017—trailing an annual population increase of 1.7%.