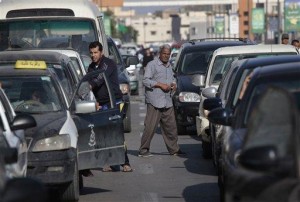 Libya is the second petroleum producer in Africa right after Nigeria and before Algeria. Having also the biggest natural reserve of petroleum in Africa it was a surprise to see long waiting line at petrol stations in the countries capital for the past few days. All over Tripoli people are patiently waiting for hours just to fill up their car tanks. This surprising situation was explained by Essam Ali Muntasir, Zawiya Oil Refining Company’s spokesman. Found about 50 km from Tripoli, this petroleum industry has a capacity of producing about 120 000 barrels per day. 40% of the region’s oil needs are provided by this refinery alone. According to him, protests outside this company located in Western Libya provoked the shutting down of operations for many consecutive days. Zawiya Oil Refining Company which is Libya’s main oil refinery ceased work due to the dissatisfaction of wounded veterans of the war which overthrew Muammar Gaddafi just a year ago. Demanding first their full rights from the government they also ask for a proper compensation for the sacrifice they had to endure. These veterans are voicing their deception by not allowing “any tankers to leave” stated Essam Al Muntassir. In addition, no employee could enter the company to resume their work.  Eager to restart filling up  petrol stations of western Libya, the refinery’ s officials and elders from the Zawiya have been working hard  to mediate the negotiation between veterans and the government without having to use military or police forces. However, this type of event that just followed a gun battle which ended up by wounding five people in the center of the capital is a sign that security conditions in Lybia still need to be worked on.