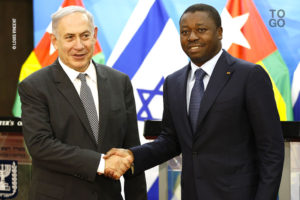 Togo is one of Israel’s strongest friends in western Africa, as evidenced last September when it joined Rwanda, Kenya and Burundi to support Israel at a key vote at the International Atomic Energy Agency.

During the Wednesday meeting, Rivlin told his counterpart from Togo that his country’s ability in agriculture, together with technological capabilities will be shared with the West African nation.

Rivlin thanked Gnassingbé for standing with Israel and reiterated Israel’s commitment to work with Africa on humanitarian issues and initiatives stating that Israel and other European countries recognize that “Africa is the future.”

According to Prime Minister Benjamin Netanyahu, Faure Gnassingbé’s visit comes at a very important time for Israel’s relations with Africa.

“I must say that I think the sky is the limit in all areas, I mean: water, agriculture, technology, health, education, tourism, security and every other field,” the prime minister noted.

He emphasized his country’s return to Africa, tasking Togo to play a role in a situation that he described as ‘‘long overdue.”

‘‘I’d like to talk to you about our mutual relations but also how Togo can further assist us in the great return to Africa. I think it’s long overdue. And it’s important for the countries of Africa and for Israel,” he said.