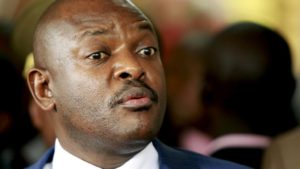 The central African nation has been gripped by violence for more than a year, triggered by President Nkurunziza’s decision to seek a third term.

However, President Nkurunziza’s lawyers successfully argued in the constitutional court that his first term did not count as he was appointed by MPs.

The public supported an all-inclusive government, he said.

“I can’t specifically say what the Burundians said but I can note that they raised their concerns on the quotas of 60 per cent Hutu and 40 per cent Tutsi, which disregards the twa ethnic (group),” he said.

As a reminder, the Burundian president swore loyalty to the constitution last year, to assure national unity and to bring stability to the deteriorating security situation.

One year later, the sounds of gunfire might have gone silent, but political tensions and human rights abuses persist.

According to human rights organizations, more than 450 people have been killed since April 2015 and a quarter-of-a-million have fled home seeking refuge in neighboring countries.