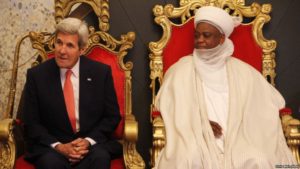 The United States Secretary of State on Monday said the fight against corruption should be pursued as a global security priority of the first order.

John Kerry who was speaking during an official visit to Nigeria said ‘‘corruption costs the global economy $2.6 trillion a year.”

“It’s not just a disgrace and a crime. It’s also dangerous,” Kerry said, addin g that the money being lost to corruption across the world was enough to provide decent livelihood for people.

The U.S. top diplomat said he was satisfied that Buhari understood the evil of graft in his country and was working assiduously to stem the tide, describing Nigeria as a regional leader in the fight against corruption.

“Nigeria is also a role model in the ongoing global efforts to fight corruption and I acknowledge measures being taken by the Buhari administration to entrench morality, transparency, honesty and good governance in the country”, he said.

Kerry particularly lauded Nigeria’s efforts at recovering stolen funds, saying that there was need for all government institutions, including the military, other security agencies and the judiciary, to support the anti-corruption drive.

He assured Nigeria that the U.S. was fully committed to fighting corruption and entrenching good governance globally. Apparently taking a swipe at those angling for the split of the country, Kerry said, “One of Nigeria’s strength is diversity of culture and religious tolerance.”