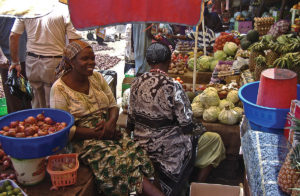 “Everything here comes from Uganda and the road is closed, transportation of the goods to reach here is a problem, clearance is expensive, the road blocks here are expensive so, if we don’t sell our commodities at high prices, there’s nothing we can get,” Zabibu Daru, a market vendor told Reuters.

The world’s youngest nation majorly relies on oil as the main source of revenue, but the reduced global oil prices have affected its oil production.

The oil, which at the time of independence five years ago contributed 98 percent of the national budget, has sunk to just under 150,000 barrels a day.

Last week the government has adopted an ambitious budget for 2016-2017 of around one billion dollars, three times as big as the previous year’s.

South Sudan’s economy, ravaged by a civil war that erupted in 2013, was further damaged by a wave of clashes in July that pitted President Kiir’s troops against the former vice president Riek Machar’s forces in the capital Juba.

At least 300 people were killed in the latest violence, and more than 60,000 forced to flee the country.

Among those who escaped were many of the nation’s traders and bankers, leading many businesses to close.